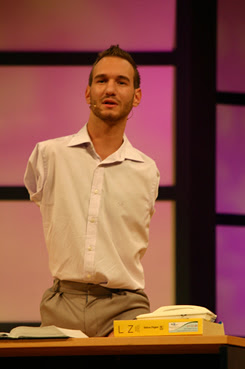 http://www.youtube.com/watch?v=v4uG2kSdd-4
watch this video...
Take a few minutes and listen to the motivational words of Nick Vujicic. No matter how hard things get, as Nick says "you will find the strenght to get back up".
and the most part that i love when nick say nothing impsble when we try...try...n keep trying and never give up in our life..
very tough person
Nick Biodata:
Nick Vujicic (born December 4, 1982) is a preacher, a motivational speaker and the director of Life Without Limbs, an organization for the physically disabled. He regularly gives speeches across the world on the subject of disability and hope.

The first-born child in his devout Serbian Christian family, Nick Vujicic was born in Melbourne, Australia with the rare Tetra-amelia disorder: limbless, missing both arms at shoulder level, and having one small foot with two toes protruding from his left thigh. Initially, his parents were devastated. Vujicic was otherwise healthy.

His life was filled with difficulties and hardships. One was not being able to attend a mainstream school because of his physical disability, as the law of Australia required, even though he was not mentally impaired. During his schooling, the laws were changed, and Nick was one of the first disabled students to be migrated to a mainstream school[2]. He learned to write using the two toes on his left "foot," and a special device that slid onto his big toe to grip. He also learned to use a computer and type using the "heel and toe" method (as demonstrated in his speeches). He can also throw tennis balls and answer the phone. He can also shave and get a glass of water (also demonstrated in speeches).

Being bullied at his school, Nick grew extremely depressed, and by the age of eight, started contemplating suicide[3]. After begging God to grow arms and legs, Nick eventually began to realize that his accomplishments were inspirational to many, and began to thank God he was alive. A key turning point in his life was when his mother showed him a newspaper article about a man dealing with severe disability. This led him to realize he wasn't the only one with major struggles[4]. When he was seventeen, he started to give talks at his prayer group[5], and eventually started his non-profit organization, Life Without Limbs.[6]

Nick graduated from college at the age of 21 with a double major in Accounting and Financial Planning. He began his travels as a motivational speaker, focusing on the topics that today's teenagers face. He also speaks in the corporate sector, although his aim is to become an international inspirational speaker, in both Christian and non-Christian venues. He regularly travels internationally to speak to Christian congregations, schools, and corporate meetings. He has spoken to over two million people so far, in twelve countries on four continents (Africa, Asia, Australia, and North America).[7]

By the age of 25, Nick hoped to become financially independent. He wishes to promote his words through television shows such as the The Oprah Winfrey Show, as well as by writing books. His first book, planned for completion by the end of 2009, is to be called No Arms, No Legs, No Worries![1]

His motivational DVD, Life's Greater Purpose, is available on the Life Without Limbs website.[8] Most of the DVD was filmed in 2005, featuring a brief documentary about his home life, and how he does regular things without limbs. The second part of the DVD was filmed at his local church in Brisbane, and was one of his first professional motivational speeches. His motivational speeches can be seen on the Premiere Speakers Bureau Website.

His secular DVD "No Arms, No Legs, No Worries" is available online through his corporate motivational speaking company "Attitude Is Altitude."

welcome to ryuji;s life
thnks for visit my page
leave ur coment before leaving..:)
:-)